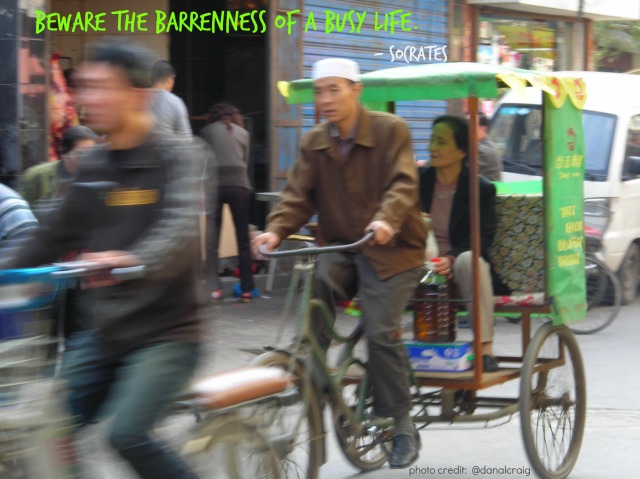 Do you remember the days when a casual greeting to a friend or colleague went something like this?

You: Hi. How are you doing?

That was it. Short, sweet, drama free.

But things change and evolve and just get downright weird. The idea of the ‘simple greeting’ is mere nostalgia at this point. Nowadays, no conversation is complete without one or both parties lamenting the depth and breadth of their busy-ness.

Mind you, it’s often the same people claiming busy-ness who, in the next breath, tell you how they just finished binge-watching the last two seasons of “House of Cards” in preparation for the upcoming season premiere. Is it just possible that we’ve lost track, not only of the real meaning of busy, but also of our own role in the constant perception and sensation of feeling that way?

Many people seem to wear busy-ness like some badge of honor, a competition to see how much can be packed in to a day, a week, or more. A competition that – if you believe the time-crunched masses – measures worth and importance.

Early in my career, I worked with a guy who, almost on a weekly basis, would let me know how many hours he’d worked the previous week. It was often in the triple digits. He didn’t seem to know how to turn the tide and get out of the cycle. In the beginning, I listened attentively. It seemed like something he was genuinely trying to resolve. I tried to understand what was requiring so much of his time and attention. It certainly didn’t seem like a sustainable situation, so surely changes must be made.

He rebuffed any suggestion I made. He and I had similar roles, and while I routinely worked more than 40 hours a week, I couldn’t imagine how one could possibly approach triple digits. Was I not carrying my weight? Was I the reason he was having to put in so many hours?

Perhaps in a parallel universe, everything’s about me, but in this case, it certainly wasn’t. He was just “that guy”. The guy who wants to complain about his load, effort, and loyalty being greater than everyone else’s. The guy who says he doesn’t want things to be that way, but seems incapable of setting and following boundaries. The guy who, in the time he takes to detail all the ways in which he’s in over his head, could have knocked out at least three things on his burgeoning list.

The problem is that now every third person seems to be “that guy”. Whether it’s work, or kids, or even “House of Cards”, too many people are complaining about being busy. Through rigorous statistical analysis (well, perhaps not – I’m much too busy for that!), my guess is that at least half of these people choose to act busy, choose to fill their days and time with laundry lists of tasks, never stopping to let the dust settle.

Of course, sometimes we really are busy, and that’s just the way things are for a bit. Maybe you’re moving house, starting a new job, preparing for a baby, or planning a wedding. Those life changes will push the most balanced of us a bit off-kilter. But it’s temporary. We plan for it, suck it up, and move on.

When busy becomes a lifestyle, one that we complain about at the same time we’re perpetuating it, we’re heading toward dangerous territory. It’s almost hard to imagine what busy would have looked like in Socrates’ time. I mean, they didn’t have the power of flight or 24-hour fitness centers, much less the Internet. But he wasn’t wrong when he described a continually busy life as barren. It’s an uncontemplated life. Perhaps, it’s an impressive list of completed tasks, but all the meaning, importance, and value is sitting on our surfaces, waiting to be brushed off as we flit to the next thing on the list.

Breathe deep. Just sit for a minute and let your mind wander. “House of Cards” will wait.

Okay, it’s True Confession time: I’m a world-class procrastinator. I mean, the kind worthy of tiaras, statues, and waving from podiums. What’s that saying? Anything worth doing is worth doing well? Well, I seem to have applied that philosophy to procrastinating. Probably not the original intention.

As a child, I recall this being an issue with schoolwork. I always got everything done, mind you, but it was often at the last gasp. It wasn’t even a state I was aware of until my mother brought it to my attention. She might have 1/8 of a gram of procrastination in her. It just isn’t her way. I’m sure it frustrated her to have a child who had mega doses of a trait she couldn’t understand. But worse than not being able to understand it, she couldn’t remediate it. Oh, how she tried.

I was probably at my best during college. I was so concerned that my lack of discipline was going to lead to my intellectual decline, that I over-compensated and studied like a fiend. I kept a notebook where I tallied my study hours each day, totaling them at the end of each week and month. While it may have thrilled my mother, I’d gone overboard and longed for my days of waiting till the last minute. By my junior year of college, I’d abandoned the notebook for something that felt a little more natural for me. Plus, I was sure I wasn’t going to flunk out and shame the family name at that point, so it was okay if I backed off a bit.

As an adult, I can’t say this trait hasn’t driven me crazy many times. It often makes me feel undisciplined, unfocused and lazy, assuming that I could right the ship if I really wanted to complete the task badly enough.

In moments where I’m feeling a little more generous with myself, I wonder if the procrastination serves a purpose that I have yet to identify and appreciate. While it’s true that I may need to do A, but set about doing B through F before circling back, at least I’ve completed B through F. In fact, in some cases, I can absolutely say that in my attempt to procrastinate, I become oddly productive. Maybe not productive at the thing I needed to be doing, but productive nonetheless.

There’s a wealth of information and research about procrastination. It seems to occupy the collective conscience in a way rarely seen with other personality traits. Procrastination is rarely seen as positive. More often it’s considered maladaptive and something to be fixed. When I contemplate the nature of my procrastinating (probably in an attempt to delay working on something else), I make the following observations:

Are you a procrastinator? Perhaps a recovering procrastinator with a 12-step program you want to share?? I’m definitely still a work in progress. Hope I always will be!