If you’re a runner, you might be familiar with the term ‘negative splits’. It refers to running the second half of a race at a faster pace than the first. It’s a strategy many runners pursue, since it’s considered to be one key to faster overall times. I was contemplating this concept a few weeks ago after I had the unplanned fortune to run a negative split during a 10K trail run.

As a woman of a certain age, I thought how this concept might be applied to life. You see, I’m not just approaching middle age. I’m firmly and fully in the midst of it. There’s a time, maybe in your late thirties, where you can stave off the notion of middle age. I mean, 70 is the new 50, so surely 35 isn’t considered middle age. Then 40 comes, and you think, well, 80. Eighty’s not so bad. But a few years in to the decade, you really can’t ignore it anymore. You’re there. Halfway through, perhaps more. Deal with it.

There’s a sense of not wanting to be wasteful with my time. This is usually what I’m thinking about while I’m binge-watching missed episodes of The Good Wife on Amazon Prime. Clearly, I still have some work to do.

And that’s kind of the point. I do still have things I want to do, things I want to explore, experience, and discover. I want to keep thinking that’s the case and not let time just drift by. As a child, I recall relaxing on a raft in the ocean, eyes closed, not concerned about much until I woke with a start to find that the currents had moved me far from where my family was on the shore. It sure could take a lot of effort and time to get back to where I wanted to be.

Drifting isn’t all bad. Sometimes it’s a path to finding something you never even knew existed. I’ve done a fair amount of that thus far, and thankfully most of my drifts have led to positive results. But I know myself better now and suspect that mindless drifting is unlikely to lead me to the finish line, arms raised, smile on my face, satisfied with my life in negative splits. 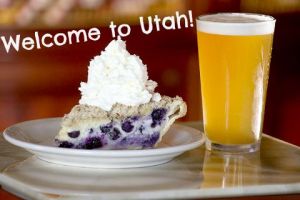 If you happen to be passing through Utah today, you may be surprised to find many businesses are closed, state liquor stores are shuttered, and there seems to be a celebratory spirit in the air. What’s happening, you might ask. Today is Pioneer Day, a day that commemorates the settling of the first Mormon pioneers in the Salt Lake Valley in 1847.

Prior to their westward trek to Utah, the Mormons lived in Nauvoo, Illinois; however, after members of this new religion were persecuted for their faith, they packed up and headed out of town in search of a peaceful homeland. After what was reported to be a long, arduous journey punctuated by illness, death, and treacherous conditions, Brigham Young declared the Salt Lake Valley as the new homeland of the Mormon faith.

I moved to Utah almost twenty years ago, blithely unaware of the importance of July 24th. The mountain town I live in has less than 10,000 year round residents, three ski resorts, and most people came from somewhere else. Consequently, it’s a bit of an anomaly in the state and is somewhat sequestered from all things pioneer. I never took the day off work, so it was several years before I realized all the activity that was taking place a mere thirty miles west, not to mention elsewhere in the state.

Pioneer Day is marked by spectacular fireworks shows, parades, contests, traditional dress, and many a family reunion. But in recent years, a counter-culture has developed its own version of the state holiday. For non-Mormon Utahans, Pioneer Day has been re-imagined as Pie and Beer Day. While many are parading through city streets in prairie dresses and bonnets, the Pie and Beer folks are indulging in craft beers and pie, an intriguing collaboration between local breweries and bakeries.

If nothing else, Utahans have a sense of humor. Whichever version of the holiday you’re celebrating, have a good one!

I don’t believe in much that the Duggars do. Their lifestyle in no way resembles mine. I’m single. I don’t have any kids, and while for a moment I might have considered one or two, I can’t rub enough brain cells together to make sense out of having 19. Which is all to say that I have no particular reason to empathize with their current situation.

And, yet, I do. Because their situation is all of ours.

Our collective nasty, vitriolic response to the parents’ actions says way more about us than it does them. I don’t doubt for a moment that their love for their children is real and that they’re doing the best they can, like most of us are. And also like most of us, they’re going to get it wrong sometimes. This situation with Josh and the girls is likely one of those times. If your child came to you with the news that Josh did, are you really so certain you would march him to the police station for his arrest? Would you demand he be labeled a sexual predator and sent to prison?

But the brave thing to do would actually be to keep the cameras rolling. Follow the family, who is now real and raw, and see how they respond to this. Many families, too many for sure, are in similar situations. We all want to act like it’s not us. It’s always somebody else, but it’s so frequent, so pervasive, that it can’t always be somebody else. We won’t eradicate molestation or sexual assault by pushing it aside and acting like it’s the opposite of us. We won’t eradicate it by devaluing the comments of the girls who were molested, demanding their outrage be greater than or equal to ours. And we certainly won’t eradicate it by burying the stories, hiding them in the shadows in the same way the Duggar parents have for all these years. Our family members are the victims. Our family members are the perpetrators. It’s time we started acting like it so we can have a real dialogue.

To that end, TLC has partnered with the Rape, Abuse, and Incest National Network (RAINN) and Darkness to Light to produce a documentary designed to spark a national dialogue. It sounds like the Duggars will be a part of this too. Perhaps it can act as a new beginning instead of a fall from grace that will be forgotten all too soon.

A long time ago, I recall a friend telling me she learned more about the Vietnam War from Danielle Steel than she had in school. It makes the mind reel, doesn’t it? It certainly seemed plausible though. There can be no argument that Danielle Steel is a much easier read than the average high school textbook. It’s also true that a history textbook might, among all the topics it’s expected to cover, spend no more than ten pages on a war that lingered for well over a decade (depending on what event you think marked the beginning) and continues to linger in the collective American psyche.

More recently, it seems we’re getting our historical education from movies. While this may be enjoyable, the problem is that we often leave the theater and store the information under the heading of “FACT”. It’s a disturbing trend, one that takes advantage of our increasingly addled, overloaded brains. We often have too many other distractions and interests to round out the information we receive at the movies. Saw “Schindler’s List”? That’s the Holocaust sorted. Watched “Selma”? Civil Rights understood! Rented “Born on the Fourth of July”? Check off the Vietnam War.

I remember a friend asking me if I had seen “The Monuments Men”, and I quipped that I hadn’t because I was tired of getting all my history from Hollywood. I eventually caved and saw the film. I enjoyed it so much that I decided to follow up by reading the book. Big mistake. Huge. I spent the first fifty or so pages just trying to figure out who the hell everyone was – which film character represented each real life person. But I couldn’t do it. I had too many characters and too few people. I eventually abandoned that quest in hopes of just enjoying the (presumably more factual) book. I kept waiting for Rose Valland to show romantic interest in Rorimer. I kept trying to make sense of the story surrounding Michelangelo’s Madonna of Bruges. I was incensed in a way that I hadn’t been before when faced with similar cinematic dupes. My mistake was two-fold: reading the book too close to the time of seeing the movie, and more importantly, assuming that there was any relevant meaning to the words “Based on a True Story”.  In my opinion, the movie was a complete re-imagining of the information presented in the book.

Well, of course it was, right??

While there are certainly indisputable facts in history, the discipline is largely interpretative analysis with a point of view. Historians can’t explain eras of history without interpretation. And Hollywood’s attempts to recreate any snapshot in history is yet another point of view. More cinematic than factual. More calculated drama and good lighting than reality. This is by design, which is what I failed to remember. We can’t expect two to three hours in the theater to constitute an education on any topic, but it can be a worthwhile introduction. Let those wonderful movie moments inspire you to read and research more about a topic. Don’t use it to check off the topic in your mind, assuming you now know the untold story.